The NOBANIS database has been part of sevel project regarding non-native species in Europe. Below you will find more information on the the different projects and links to final reports etc. 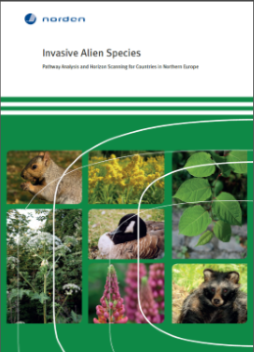 This report is the product of a collaboration between the Nordic Council of Ministers and ten participating countries and territories (Denmark, Estonia, Finland, the Faroe Islands, Iceland, Latvia, Lithuania, Norway, Svalbard & Sweden), all part of the NOBANIS network. The aim of this project was to contribute to the fulfilment of obligations in the Aichi target 9 under the Convention on Biological Diversity (CBD) and the EU Biodiversity Strategy 2020 target 5. This was done by conducting a pathway analysis and horizon scanning. The pathway analysis was carried out to identify and prioritise pathways of introduction by which alien species were introduced in the Nordic and Baltic region, along with Iceland and the Faroe Islands. In order to examine which new alien species may be introduced and established in the countries in the future, a number of potential door knocker species were assessed by experts.

The present report aims at providing NOBANIS countries and other
European countries with a useful tool for prioritizing their measures to
prevent the introduction of IAS. Few species are able to colonise the full range
of climatic conditions in Europe, which pleads for the use of a biogeographic approach when dealing with early warning, rapid response issues. The project further develops the use of biogeographic regions as a tool for warning European countries when a new, potentially invasive species is under establishment.

This Commission funded study provides an overview of the existing policies on invasive alien species in the 27 EU Member States, as well as in four OECD countries - Australia, Canada, New Zealand and the United States. The objective of this study was to screen the existing policies, measures and initiatives on invasive alien species taken at national level against a set of elements which need to be considered to ensure that the introduction of such species is prevented and/or their establishment in the EU territory is identified and controlled. Such screening exercise provides support to the European Commission in assessing the policy baseline.

Below relevant links to the report can be accessed:

The purpose of this report/workshop is to give recommendations on how a European EarlyWarning Rapid Response system can best be constructed and developed, in a way where it can help European countries in prioritising the effort against invasive alien species best possibly.

Abstracts from the workshop: