Barnacles are sessile crustaceans that secrete calcareous plates around their bodies for protection. Barnacles attach to hard substrates such as shells or skins of other marine organisms or to man-made objects, e.g. ships, piers, offshore platforms, etc. Some barnacles have a relatively soft stalk and often attach to floating objects. These are the so-called goose barnacles. Most attach directly to the substrate. Barnacles have free-swimming larvae, and it was actually the appearance of nauplii larvae that caused Charles Darwin to identify them as crustaceans. Before this they had usually been considered a special group of molluscs. Many of the species have originally been described by Darwin in his large monograph published in 1854.

Because barnacles will attach to wooden as well as metal and even plastic substrates, they have been traveling around the world for centuries, and it is actually surprising that only a small number of species have been recognized as introduced in Nordic waters. Of course there is always the possibility that more species will have to be classified as cryptogenic if their region of origin cannot be identified.

A special group of Cirripedia is the parasitic Rhizocephala that parasitize other crustaceans, notably crabs. Rhizocephalans can be recognized as Cirripedia because they have a free-swimming cypris larva. In some cases the reason for successful invasion of crabs is that they are released from these parasites. In other cases the parasite is introduced with the crab and may switch hosts in the introduced region. There are no introduced Rhizocephala in Nordic waters at the present time.

Identification of sessile barnacles is usually depending on the size, shape and number of calcareous plates surrounding the body. Also the shape and relative size of the movable plates covering the opening may be important. Coloration and ornamentation of the plates is useful for some species. The soft body parts are rarely used for identification, but in a few cases it is necessary to remove the animal to examine the basal plate for species identification. 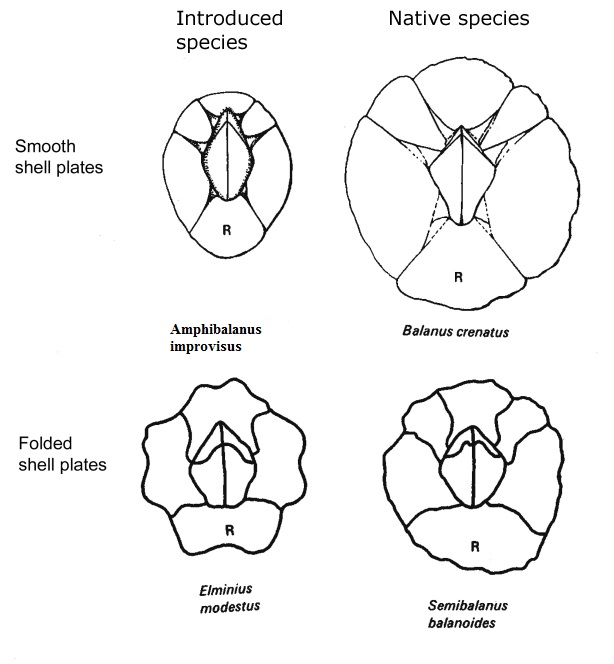 Cirripedia have two free-swimming larval stages. The first is the nauplius, which in barnacles have characteristic “horns” at the front end of the body. The second larval stage is the cypris, which is similar to an ostacod having a bivalved skeleton covering most of the body (From Rainbow 1984). 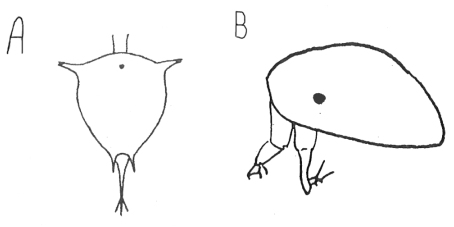 In Nordic waters goose barnacles, the species of Lepas, usually found on floating objects should be considered cryptogenic. There are two species of sessile (or acorn) barnacles introduced into Nordic waters. These are Amphibalanus improvisus Darwin, 1854 and Elminius modestus Darwin, 1854. These will be treated in separate fact sheets.

Several species have been found just outside Nordic waters, e.g. in the Netherlands and U.K. One of the most common species, which now occurs almost worldwide is Amphibalanus amphitrite Darwin, 1854, the Striped acorn barnacle. It is a tropical species and may need higher temperatures to survive in Nordic waters. Its dispersal to Belgium and the Netherlands may be a natural range expansion, as it was mentioned by Darwin from the Mediterranean and Portugal (Kerckhof, 2002). Information about this species can be found at: http://www.exoticsguide.org/balanus_amphitrite and on http://species-identification.org/species.php?species_group=crustacea&id=99

Another species that was found recently (1998) in Belgium is Megabalanus tintinnabulum (Linnaeus, 1758) (Kerckhof & Cattrijsse, 2001). However, this may be a natural range extension as it also occurs in the Mediterranean. Its current cosmopolitan distribution indicates that it should probably be considered cryptogenic.

Megabalanus coccopoma (Darwin, 1854), the Titan acorn barnacle, is a tropical East Pacific species that has been introduced to the Atlantic coast of the Americas, and has also been found in Belgium and the Netherlands (Kerckhof, 2002). Information about this species is available at: http://www.sms.si.edu/irlspec/Megabalanus_coccopoma.htm