Ascidiacea is a class of the subphylum Tunicata, formerly known as Urochordata, and phylum Chordata. This means that sea squirts are more closely related to Vertebrates (including Homo sapiens) than to any invertebrate phylum! The chordate relationship is seen in the presence of a notochord in larval ascidians and in the formation of the nervous system (Millar, 1970). There are two other classes in the Tunicata: Larvacea and Thaliacea, both of which are pelagic, often colonial species. Molecular studies indicate that these two classes cluster within the Ascidiacea, which means that classification will need to be reorganized (Stach & Turbeville, 2002).

Ascidians are often part of the fouling community and this means that they are also often transported and introduced to new regions. Adult ascidians are sessile and many species are colonial. Even the solitary species often form clusters of individuals. Fouling communities may include several species attached to one another, which sometimes makes identification confusing.

Generally, the ascidian body is embedded in a more or less gelatinous tunic (hence the name Tunicata) or test, which is composed of a cellulose-like material. There are two siphons extending from the surface; one, the branchial (or oral) siphon, is connected to the most prominent organ, the branchial sac (sometimes called branchial basket); the other one, the atrial siphon, expels water from respiration/filter feeding, faecal material from the intestine and genital products from the gonoduct. The branchial sac is used for respiration as well as for filtration of food particles. Thus ascidians are suspension feeders. The digestive system is basically a U-shaped tube, but the actual shape and length differ among species, which is sometimes used for species identification. 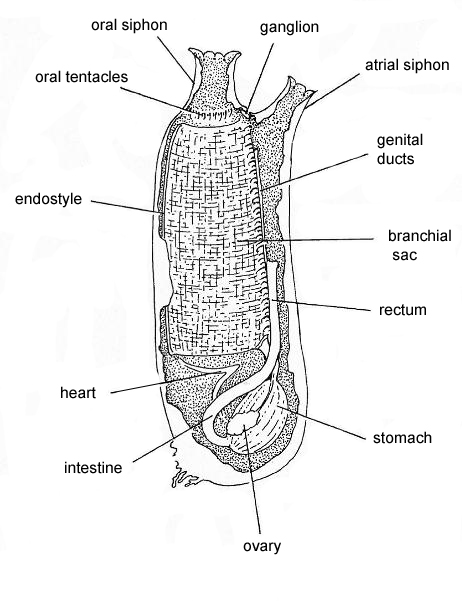 Some ascidians are known to take up and accumulate rare chemicals, like vanadium, in their bodies (Carlisle, 1968; Swinehart et al., 1974), some have highly acidic tunic fluids (Stoecker, 1980) and some species have symbiotic micro-organisms (Sybesma et al., 1981; Saffo, 1982). Because ascidians filter food particles by a combination of cilia and mucus, they can trap very fine particles (Lambert, 2005), and the large surface area of the branchial sac makes them highly efficient filtrators (Petersen & Svane, 2002).

Classification of the Ascidiacea has been based on the structure of the branchial sac, but molecular studies have shown that certain groups at family, genus or species level may need reorganization (Stach & Turbeville, 2002). However, at the present time few molecular studies are available and all existing identification keys use the classification based on morphology. There are some discrepancies among the experts about the rank of certain taxa, especially orders and suborders (Millar, 1970; Petersen & Svane, 2002).

Reproduction is usually by shedding eggs and sperm directly into the water, and the fertilized eggs undergo rapid development, usually forming a "tadpole-larva" within one day. The swimming larva does not feed and settles within hours of hatching. Some species are brooders, and the short-lived swimming larva escapes through the atrial siphon. Colonial species (and some solitary ones as well) also have asexual reproduction (Millar, 1970).

An overview of ascidian ecology is found in Lambert (2005a).

There are a few species of introduced ascidians in Nordic waters (see separate fact sheets). The number of native species is too high, about 80 species total, to list here, but there are a few introduced species in neighbouring waters that deserve mentioning because they are likely to expand their ranges with increasing sea temperatures. It should be noticed that the native NE Atlantic/ Mediterranean species Botryllus schlosseri (Pallas, 1766) has been introduced to North America, and is considered a nuissance species there (see e.g., http://www.exoticsguide.org/botryllus_schlosseri).

Didemnum vexillum Kott, 2002 is a colonial species, which was known as Didemnum sp. prior to its formal description, or it was misidentified as one of the native species (Lambert, 2009). It was found in the Netherlands in 1991 (Gittenberger, 2007), in France in 1998, and in Ireland in 2005 (Minchin, 2007; Lambert, 2009). In late 2008 it was found for the first time in Great Britain (Griffith et al., 2009). The species listed as D. helgolandicum Michaelsen, 1921 in Synopsis of British Ascidiacea (Millar, 1970) and Scandinavian Ascidiacea, with records from Norway and the Faroe Islands (Millar, 1966), has been misidentified, but it is not possible to identify it from Millar's description (Lambert, 2009). D. vexillum has also been introduced to North America and New Zealand, and most likely is a native of Japan. It has caused considerable trouble for aquaculture in New Zealand and North America (Bullard et al., 2007; Denny, 2008), and is beginning to trouble mussel culture in the Netherlands (Gittenberger, 2007). For more information see: http://www.invasivespeciesinfo.gov/aquatics/seasquirt.shtml, http://woodshole.er.usgs.gov/project-pages/stellwagen/didemnum/images/pdf/news/nz051806.pdf last access 3. March 2015 (excellent pictures for identification), http://www.issg.org/database/species/ecology.asp?si=946&fr=1&sts,

Botrylloides violaceus Oka, 1927 is another Japanese species, which has been introduced to North America, and to the Mediterranean. In 2004 it was found in the U.K. (Arenas et al., 2006) and it is also reported from Belgium, the Netherlands and Ireland (Minchin, 2007; Gittenberger, 2007). For further information see: http://www.exoticsguide.org/botrylloides_violaceus, http://www.mass.gov/eea/docs/czm/invasives/id-cards/b-violaceus.pdf last access 3. March 2015, http://www.marlin.ac.uk/speciesinformation.php?speciesID=2791

Denny, C.M. 2008. Development of a method to reduce the spread of the ascidian Didemnum vexillum with aquaculture transfers. ICES Journal of Marine Science 65: 805-810.

Gittenberger, A. 2007. Recent population expansions of non-native ascidians in The Netherlands. Journal of Experimental Marine Biology and Ecology 342: 122-126.

Lambert, G. 2005a. Ecology and natural history of the protochordates. Canadian Journal of Zoology 83: 34-50.

Lambert, G. 2005b. First North American record of the ascidian Perophora japonica. Journal of the Marine Biological Association of the United Kingdom 85: 1011-1012.

Nishikawa, T., Bishop, J.D.D. and Sommerfeldt, A.D. 2000. Occurrence of the alien ascidian Perophora japonica at Plymouth. Journal of the Marine Biological Association of the United Kingdom 80: 955-956.

Petersen, J.K. and Svane, I. 2002. Filtration rate in seven Scandinavian ascidians: implications of the morphology of the gill sac. Marine Biology 140: 397-402.