Harmonia axyridis in the Republic of Ireland

Why the concern? This is an invasive species of ladybird that was found at two sites in the Republic of Ireland during November 2010. Previous records came from 2007 and 2009 in Northern Ireland (inset map).If the harlequin ladybird becomes established, it will threaten native invertebrate diversity, could impact on the fruit production and be a nuisance in buildings.

The sightings came from two members of the public that spotted the ladybird in their homes. Colette O'Flynn from the National Biodiversity Data Centre believes that the ladybirds were seeking shelter from the cold conditions. She said 'this is not uncommon for this species'.

She added 'the specimens found could represent the tip of the iceberg in terms of a new invasion to the island of Ireland. The harlequin ladybird is one of the fastest spreading invasive species in Europe. We were lucky in the past when two previous sightings from Northern Ireland were not associated with a breeding population in the wild'.

This is a highly mobile species, which makes controlling it difficult. It can also live in a variety of habitats including trees, low growing plants such as nettles and also cropland. It can overwinter in houses or other sheltered areas.

What does it look like? Variable in colour (yellow to orange to red) (image B) and number of spots (0-20) (images A, C and D). At 6 - 8 mm long, they tend to be larger and more domed than most native ladybirds, normally with reddish brown legs. They may also have a distinctive 'M' or 'W' marking on the pronotum (back of head) (image D). Juveniles have an orange stripe on each side of their body (image E).

Where might I see it? Entering houses in winter (image C) where they can aggregate on windowsills and walls (image B); on imported vegetables, fruit or plants; and in gardens, woodlands, agricultural or horticultural lands.

For more information or to report any sightings please email: coflynn@biodiversityireland.ie or visit the Invasive Species Ireland Website. 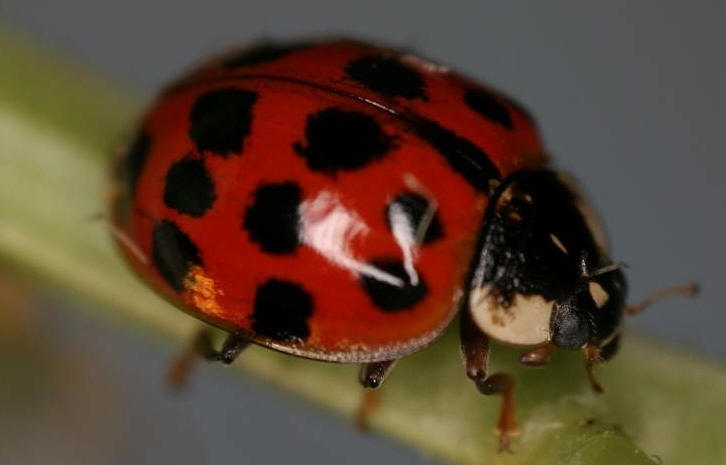 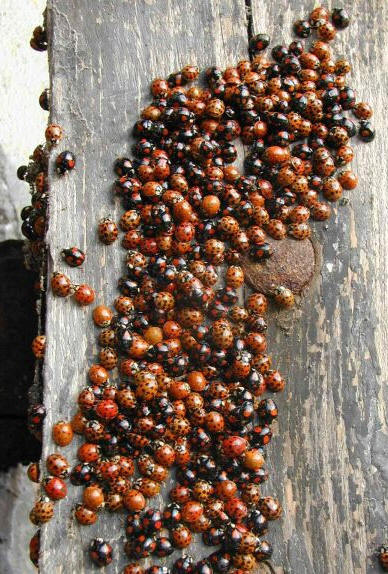 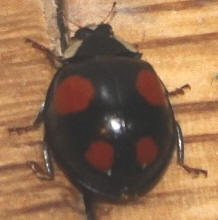 Harmonia axyridis may also have a distinctive 'M' or 'W' marking on the pronotum (back of head) Photo: Invasivespeciesireland.com 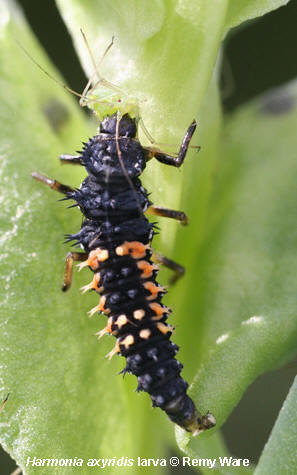 Juveniles of Harmonia axyridis have an orange stripe on each side of their body Photo: Remy Ware, invasivespeciesireland.com