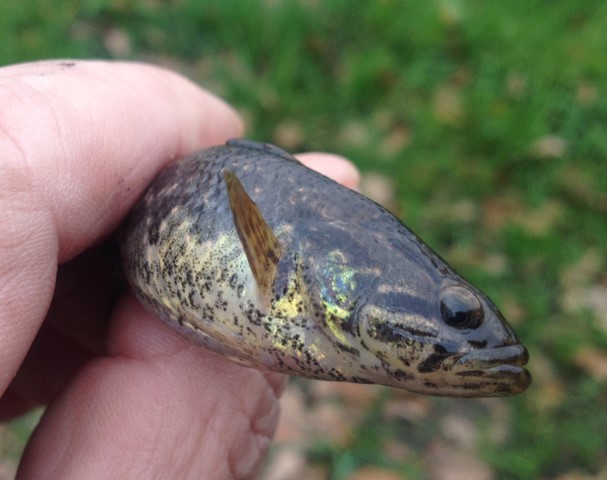 Introduced range: First record of free living Amur sleeper from Germany. On 23 November 2014, three adult specimens (all about 7-8 cm in total length) were caught in a small running water (49°15.7'N 12°6.9'E; Bücherlgraben, Danube tributary, Bavaria, Germany), adjacent to managed fish ponds with known populations of Amur sleeper. May be one specimen has been caught by an angler at the same site in summer 2014, the record could not be confirmed yet.

Impact: Significant adverse impact on native aquatic fauna. May be also impact on the economy.

In small water bodies, known to extirpate other fish species, amphibian larvae and macroinvertebrates. In accordance with the guidelines of the “German-Austrian Black List Information System (GABLIS)” (Essl et al. 2011), Perccottus glenii is considered a threat to German biodiversity and has been assigned to the German List of invasive alien species.

Amur sleeper was probably accidentally introduced into these fish ponds with commercial ﬁsh transports. This alien fish species has been known here since the early 2000s (Reshetnikov & Schliewen 2013). In 2009 specimens were collected from the fish ponds, identiﬁed and deposited in the Bavarian Natural History collection (Reshetnikov & Schliewen 2013).

Additional information: The fish ponds in the “Charlottenhofener Weihergebiet” are managed extensively for the production of pike-perch (Sander lucioperca), common carp (Cyprinus carpio), and pike (Esox lucius) (Reshetnikov & Schliewen 2013). The fish ponds were drained oﬀ every year or every third year (Reshetnikov & Schliewen 2013), discharging the water into small running waters located near to the ponds. Thus, it is very likely that by this pond management Amur sleeper (adults, juveniles and/or eggs) was (repeated) unintentionally released into the wild.

In the case of the present invasion, effective management policies should urgently be developed and implemented by the appropriate authority to stop dispersal of Amur sleeper in German waters. Otherwise the establishment and spread of this invasive alien species in German rivers and an increase in abundance and appearance in new watercourses can be expected in the coming years. The small running water with confirmed Amur sleeper occurrence is directly connected with the Naab River which flows into the Danube near Regensburg (Bavaria, Germany). Because this species is not a strong swimmer, it might be expected that its dispersal within the Danube river system would be mainly downstream and thereby threatening not-yet-invaded habitats along the upper and middle Danube in Germany, Austria, the western part of Slovakia and central Hungary (cf. Reshetnikov & Schliewen 2013).

However, due to the short distance between mouth of River Naab (Danube, river kilometre 2385.3) and upstream located mouth of Main-Danube-Canal (Danube, river kilometre 2411.6) an active migration of Amur sleeper or passive dispersal (e.g. of eggs) with ships into the canal cannot be excluded. The Main-Danube-Canal crosses the European main watershed and connects the Danube and Rhine river basins. After spreading through the canal, downstream dispersal of Amur sleeper along Main and subsequently along middle and lower Rhine will be threatening native aquatic fauna of not-yet-invaded northwestern Europe.